The mission of the Office of Justice Services (OJS) is to uphold Tribal sovereignty and provide for the safety of Indian communities by ensuring the protection of life and property, enforcing laws, maintaining justice and order, and by ensuring that sentenced American Indian offenders are confined in safe, secure, and humane environments.  Ensuring public safety and justice is arguably the most fundamental of government services provided in Tribal communities.

The Office of Justice Services holds jurisdiction over crimes committed within Indian Country as defined by 18 U.S.C. '1151(a), (b) & (c) - 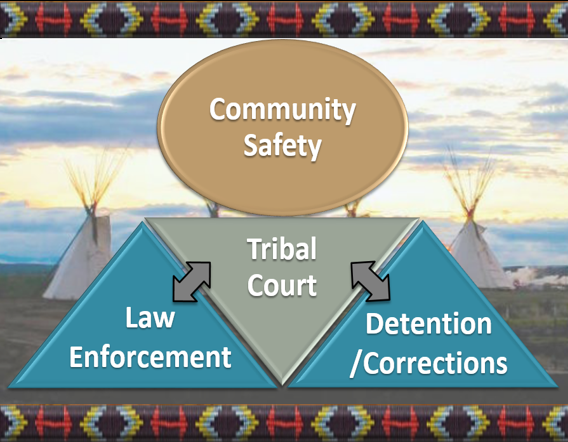 Field programs are comprised of the services provided at the local level (along with management oversight) directly by OJS personnel or by a Tribe through a self-determination contract or compact.  These include Uniform Police, Criminal Investigation, Dispatch, and Corrections, and are managed geographically through 9 OJS districts.  From its headquarters in Washington DC, down through the OJS chain of command to the local level, field program personnel integrate key national goals and priorities into consistent implementation of policies and practices.

Uniform Police Officers are generally responsible for patrolling designated service areas and responding to a wide range of calls for service.  Criminal Investigators are primarily responsible for conducting investigations of criminal activity, and Dispatch personnel function as the critical communication link between the public and emergency response personnel.  Together, these three programs represent the law enforcement component of justice systems in nearly 200 Indian communities.

Another fundamental component of local public safety is administered by the OJS Corrections program which oversees, or directly operates, more than 90 detention centers throughout Indian Country.  Running these facilities in a safe, secure, and humane manner requires correctional supervisors and officers, armed transport officers, and cooks.

The third essential piece of tribal justice systems is the Tribe’s court.  Throughout Indian Country, the vast majority of courts are run by Tribal governments through self-determination agreements executed with BIA regional offices rather than OJS.  However, there are a handful of Courts of Indian Offenses, or “CFR Courts” that the BIA operates directly on behalf of the Tribe.  OJS works with the BIA regional program staff to provide technical assistance and supplemental funding to the tribal and CFR courts on an annual basis.

Unlike the program areas covered by the Offices of Indian Services and Trust Services, whose programs are administered through the BIA regional office structure, all law enforcement and corrections programs are administered through the OJS line of authority and its nine district structure.  This is because federal law mandates supervision of law enforcement personnel exclusively to other law enforcement personnel up through the Deputy Bureau Director, Justice Services.  In total, OJS funds just over 800 federal positions and twice as many Tribal positions to help address the public safety and justice needs of tribal communities each year.

The victim services program provides assistance to victims and witnesses who are involved with criminal prosecutions in Tribal or Federal courts within Indian country during the investigative stages of violent and/or drug crimes, which is critical to the success of many investigations. The program focuses on ensuring that victims are afforded their rights under the Crime Victims’ Rights Act of 2004 as required for Federal law enforcement agencies. This program provides direct services and follow-up services to victims and their families during their interaction with the criminal justice system.

Reliable land mobile radio communication systems are vital in supporting program functions and ensuring public safety within Indian country.  Land mobile radio is the backbone of wireless communication that enables public safety, education, public works, and wildfire programs to remain in constant contact.  This program supports the repair and replacement of radio equipment installed in hundreds of BIA vehicles across the nation, as well as hundreds of hand-held radio units, all used in primarily remote locations with limited or no cell phone coverage.

The Office of Tribal Justice Support was established within OJS to further the development, operation, and enhancement of tribal justice systems and BIA Courts of Indian Offenses.  The office regularly provides tribal courts with technical assistance in the fields of pre-trial, probation, alternative sentencing, family matter issues including domestic violence, Indian Child Welfare Act (ICWA), juvenile issues, victim witness issues, probate matters, contract matters, and matters of economic development including contract issues and Uniform Commercial Codes legislated by tribal governments. This program’s main function is to conduct assessments and document the needs of tribal courts across Indian Country, including both Tribal communities where tribes have criminal jurisdiction and also in those states where criminal jurisdiction has been remanded to the state by statute.  A uniform Tribal court review process is the fundamental mechanism used by this program to assess Tribal court processes overall, as well as in relation to specific matters such as Indian Child Welfare Act (ICWA) and probate.

At the national level, the Office of Justice Services functions as a lead Federal stakeholder and advocate for public safety and justice matters affecting hundreds of Tribal communities across the country.  We engage regularly with other stakeholders such as OMB, DOJ, the Congress, and Tribal governments to collaborate on how best to help address the unique public safety challenges faced by Tribes. 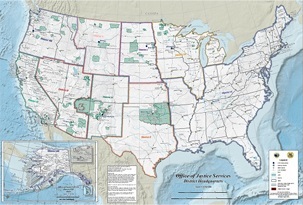