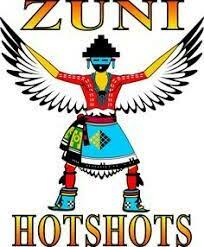 The Zuni Pueblo Knife Wing is a symbol of the Zuni Warrior Society and is a protector of the land and its inhabitants; it represents courage, honor, wisdom and strength. The spirit of this symbol is carried into battle or other life threatening situations. The Knife Wing is also a guardian angel watching each and every one of us.

Historically, the Knife Wing symbol was blessed and placed on warriors' shields to protect the warriors. This ancient tradition continues to this day with the Zuni Interagency Hotshot Crew. The symbol is part of the crew uniform and is placed on crew vehicles.

The Bureau of Indian Affairs (BIA), Zuni Agency established the Zuni Interagency Hotshot Crew (IHC) Program in September 2001. The Crew is based out of west-central New Mexico on the Zuni Indian Reservation, Zuni, NM. Zuni is one of 19 pueblos in the state. The Reservation is estimated at 463,270 acres, which includes 242,766 acres of forest.

In order to gain the crew leadership needed for an elite hand crew, supervisory candidates including Paley Coonsis, Sr., Troy Cachini, and Todd Etsate detailed to the Mescalero Hotshots in Mescalero, NM and the Redmond Hotshot Crew in Redmond, OR to gain knowledge and skills in supervising a hotshot crew.

The crew went through a training period from September 2001 to December 2003. The IHC’s very first assignment was led by Carl Crawford to the devastated World Trade Center in 2001. Mr. Crawford was the Assistant Superintendent of the Chief Mountain Hotshot Crew for numerous years prior to accepting the Zuni IHC Superintendent position.

In December 2003, the Zuni IHC gained full qualification as a National Incident Hotshot Crew and has served as a national resource ever since.