WASHINGTON — The Departments of the Interior and Justice today announced the next steps in implementing of the Not Invisible Act, including the publication of a solicitation for nominations of non-federal members to join the Joint Commission. The Joint Commission will focus on reducing violent crimes against American Indians and Alaska Natives and address the long-standing missing and murdered Indigenous person crisis. The agencies are also moving forward with nation-to-nation conduct consultations with Tribal leaders related to the Commission and implementation of the Act.

The Not Invisible Act, sponsored by Secretary Deb Haaland when she served in Congress, mandates the creation of a Commission that includes representatives of Tribal, state and local law enforcement; Tribal judges; health care and mental health practitioners with experience working with Indian survivors of trafficking and sexual assault; urban Indian organizations focused on violence against women and children; Indian survivors of human trafficking; and family members of missing and murdered Indian people.

“The Interior and Justice Departments have a unique opportunity to marshal our resources to finally address the crisis of violence against Indigenous peoples,” said Secretary Haaland. “Doing this successfully means seeking active and ongoing engagement from experts both inside and outside of the government. Incorporating Indigenous knowledge, Tribal consultation and the Commission that reflects members who know first-hand the needs of their people will be critical as we address this epidemic in Native American and Alaska Native communities.”

“The Justice Department is committed to working with the Interior Department to address the persistent violence endured by Native American families and communities across the country,” said Attorney General Merrick B. Garland. “The membership of the Commission must represent a diverse range of expertise, experience and perspectives, and we will consult with Tribal leaders who know best what their communities need to make them safer.”

Congress unanimously passed the Not Invisible Act in October 2020 to increase intergovernmental coordination to identify and combat violent crime against Indians and on Indian lands. The Act calls for the Interior Department to coordinate prevention efforts, grants and programs related to missing and murdered Indigenous peoples.

The Commission must be composed of at least 28 federal and non-federal members who represent diverse experiences, backgrounds and geography, and who are able to provide balanced points of view with regard to the duties of the Commission. The Commission will hold hearings, take testimony and receive evidence to develop recommendations for the federal government to combat violent crime against Indians and within Indian lands.

More information is available at the Not Invisible Act website. 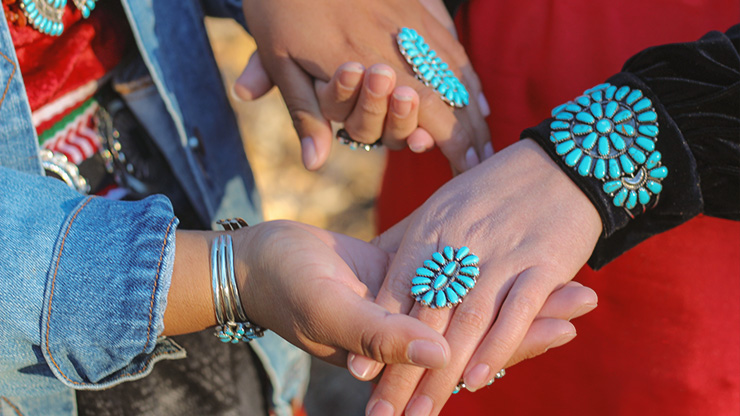