The Bureau of Indian Education marks a significant milestone by unveiling its official logo today. This is the first logo for BIE since becoming a bureau in 2006. The initial logo design was created by Kayla Jackson, a member of the Pyramid Lake Paiute Tribe who is also a graduate of the Bureau’s Haskell Indian Nations University located in Lawrence, Kansas.

“The Bureau of Indian Education is working to lay the foundation for the next generation of Native children to succeed,” said Assistant Secretary – Indian Affairs Bryan Newland. “I’m proud the BIE will have an official logo as it carries out its mission moving forward, and I’m even more proud that it was designed by a BIE student - Kayla Jackson.”

“Over the past few years, the Bureau of Indian Education has instituted new strategies to more independently serve the unique needs of our students,” said BIE Director Tony L. Dearman. “As we build our capacity, we are creating our own identity as a world class education provider. This logo perfectly captures the spirit of our mission. Every detail honors our Indigenous heritage and our commitment to the education of our students. It encapsulates intellect and determination, which is exactly what we strive to instill in every student.”

Jackson submitted her design as part of a BIE-wide competition inviting students to lead in the creation of the new logo. Following a collaborative effort where each element was thoughtfully selected to embody the essence of the Bureau, the logo went through the official process for federal approval.

“This design captures culture, knowledge, and leadership,” Kayla Jackson said. “The open book represents lifelong learning. The Indigenous student is wearing a fancy shawl regalia including moccasins, ribbon skirt, shawl, yoke, beaded headband, and eagle feather with hair long and braids. The student embodies the spirit of their ancestors by dancing with honor and carrying out prayers with every step. The eagles that are emblazoned on the shawl represent acknowledgement, strength, and determination. Finally, in the background there is the sun which gives us growth, abundance and hope.”

The center of the logo is an Indigenous student placed on an open book indicating the power of knowledge and lifelong learning. The four lines on the book represent the four directions, the four seasons, the four stages of life and four sacred plants. The logo represents the ongoing commitment of the BIE to its mission as it provides educational services to its students and Tribal communities.

The logo will be used on all official correspondence as well as publications, website, social media, and communication materials.

The Bureau of Indian Education currently supports 183 bureau-funded elementary and secondary schools located on 64 reservations in 23 states that serve approximately 46,000 Indian students. Of these, 53 are BIE-operated and 130 are Tribally controlled through BIE contracts or grants. Additionally, the BIE directly operates two postsecondary institutions: Haskell Indian Nations University in Lawrence, Kansas, and the Southwestern Indian Polytechnic Institute in Albuquerque, New Mexico. 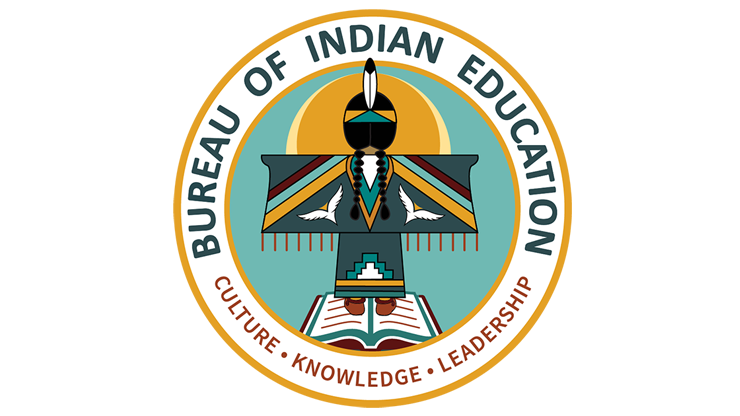