This past September, the Timber Team traveled to southern South Dakota to assist the Rosebud Sioux Tribal Forestry Department. The team helped the tribe with the layout, marking and cruising (measuring forestland to determine merchantability) of ponderosa pine trees to salvage materials lefts behind in the wake of the West SF Fire.

The West SF Fire of June 2022 caused by a downed powerline burned through 3,810 acres just west of the community of St. Francis on the Rosebud Sioux Indian Reservation in an area called Crazy Horse Valley. The Timber Team was called on to assist the tribe in salvaging timber before invasive insects such as the Ips pine beetles and the Asian long horn beetles, damage the integrity of the wood. The salvage process also helped prevent invasive species from spreading across the forest into the live and green stands of the ponderosa pine trees.

“The timber salvage team has played a crucial role at Rosebud; the team has provided knowledge and expertise to Rosebud Sioux Tribe’s Tribal Forestry and me. The team, while sharing this knowledge and expertise, helped accomplish measuring and marking 145,000 board feet of ponderosa pine for processing at the tribal sawmill,” said Ira Wilson, BIA Realty Officer and Rosebud Sioux tribal member who oversees the Tribe’s salvage operations. “A large part of being able to be successful in working with Tribes is the willingness to be a partner and work together. The Timber Strike Team does just that, be a partner in success.” 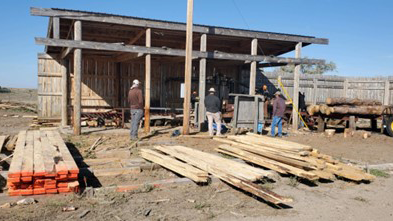