According to the Federal Bureau of Investigation’s National Crime Information Center, there are more than 1400 unresolved American Indian and Alaska Native missing person cases in the U.S. Of that, 136 cases are in Minnesota.

“President Trump created a task force to support Tribal communities, reduce the staggering number of violent crimes committed against American Indians and Alaska Natives and close out hundreds of cold cases,” said Secretary Bernhardt. “The Trump Administration is committed to justice and working alongside these Tribal communities to restore peace and prosperity.”

“While visiting the great state of Minnesota with Secretary Bernhardt, we are advancing two top priorities for the Administration: The Pledge to America’s Workers and supporting American Indian and Alaska Native communities,” said Advisor to the President Trump. “We are furthering President Trump’s commitment to forgotten men and women across our country and the Administration’s efforts to ensure that all Americans can live with dignity and the promise of a brighter future.”

“Today’s opening of the first Missing and Murdered Native Americans Cold Case office demonstrates the commitment of the Operation Lady Justice Task Force to achieving the mandate set out for it under President Trump’s Executive Order,” said Assistant Secretary – Indian Affairs Sweeney. “Cold cases in Indian Country will be addressed with determination and the understanding that the victims in these cases will be accorded some measure of dignity and compassion – not only for them, but for their survivors, as well.”

The Cold Case Task Forces are in accordance with the President’s Executive Order and will be staffed with law enforcement personnel and newly appointed special agents from the Bureau of Indian Affairs Office of Justice Services (BIA-OJS), along with personnel from other Operation Lady Justice Task Force partners including tribal law enforcement, the Federal Bureau of Investigation and Offices of the U.S. Attorneys.

A way for top federal officials to engage, coordinate and work with tribal governments on developing strategies to address the crisis, the Operation Lady Justice Task Force is working to collect and manage data across jurisdictions; establish protocols for new and unsolved cases; establish multi-jurisdictional cold case teams; improve the response to investigative challenges; and provide clarity on the roles, authorities and jurisdiction for those involved.  It is also charged with providing a report to the President of its work and accomplishments in meeting the executive order’s mandate.

Since 2019, the Department of the Interior and Bureau of Indian Affairs (BIA) have undertaken a number of efforts to address the crisis, conducting criminal investigations, stopping illicit drug activity and solving missing and murdered cases.

The BIA-OJS and its partners have opened 200 percent more drug cases across Indian Country than in the last year of the Obama Administration, and their tribal law enforcement officers have seized approximately 6,000 pounds of narcotics worth $30 million in the past two years. Preventing further violence against American Indians and Alaska Natives is largely predicated on ending illicit drug activities and sex trafficking.

The BIA-OJS's partnership with the Department of Justice’s Missing and Unidentified Persons System, known as NamUs, has led to the development and implementation of new Tribal-affiliation data fields to assist law enforcement with capturing information to track missing and murdered persons in Indian Country. Since the addition of these new data fields last year, there has been a 60 percent increase in Native-person entries into the system.

Today’s opening will be followed by Cold Case Task Force office openings in the following cities: 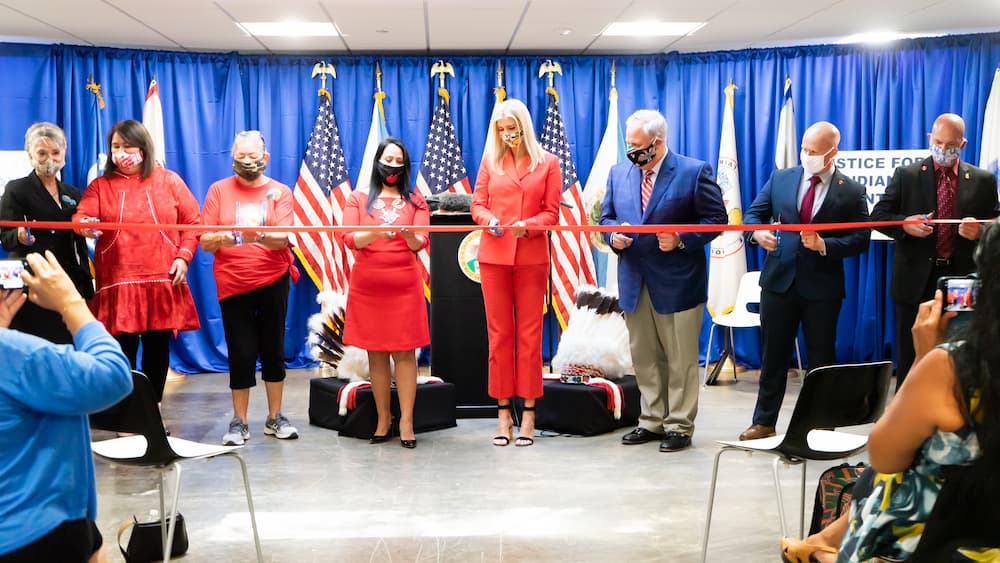