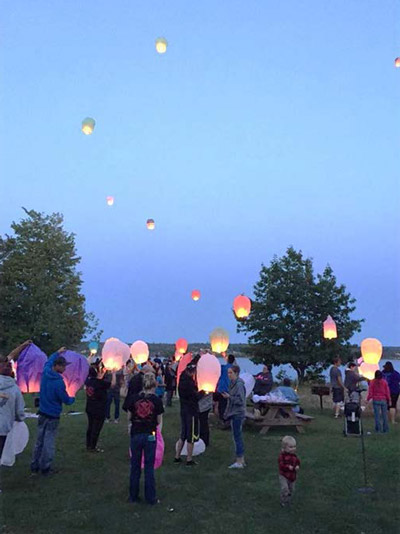 On the evening of August 27, the Keweenaw Bay Indian Community (KBIC) learned two of their firefighters were killed in a catastrophic vehicle accident in Blaine, Minnesota. James F. Shelifoe, Jr and Alan J. Swartz were killed while nine the other passengers traveling in a crew carrier were injured while on their way to the Box Canyon Fire in Utah.

In the days ahead, the entire wildland fire community heard about the tragedy and grieved with the KBIC.

On August 30, Mich. Gov. Rick Snyder ordered U.S. and Michigan flags be lowered to half-staff August 31 and September 1 on all state buildings and within the state Capitol in honor of James Shelifoe, Jr. and Alan Swartz, firefighters with the Beartown Fire Department.

As flags were lowered, many watched the well-orchestrated precession wind through Minnesota, Wisconsin and into Michigan where their fallen firefighters were returned home.

James was a member of the Keweenaw Bay Indian Community and had been with the KBIC Beartown Firefighters for a number of years. He enjoyed being outdoors, playing basketball, 4-wheeling, snowmobiling, riding his dirt bike and especially spending time with his family.

Alan was a member of the KBIC Beartown Firefighters. He enjoyed anything outdoors, including fishing, snowmobiling, camping and hunting. He loved working on anything mechanical, especially his 4-wheeler. James and Allan were laid to rest August 31 and September 1at the KBIC Zeba Hall in L’Anse, MI. The following day, the KBIC held a candlelight vigil as a final tribute to the fallen firefighters, those injured and the families affected by the tragedy. During the tribute, a balloon and Chinese lantern release took place.

Beartown Firefighters Relief Fund was established to help families. If you wish to provide support, please send a check to:

The BIA sends our deepest condolences to the families and friends of James Shelifoe, Jr. and Alan Swartz. We keep also keep the injured firefighters in our thoughts as they work through the long process of mending