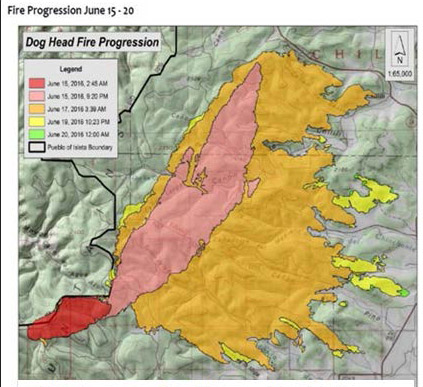 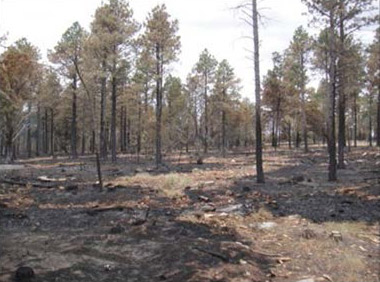 The Dog Head Fire was first reported on June 14, 2016 in the Manzano Mountains on the Cibola National Forest in New Mexico. The fire burned for six days, had an extended six-mile crown fire, and threatened residences around the community of Chilili, New Mexico, and Pueblo of Isleta Tribal lands in central New Mexico that are adjacent to the forest. More than 11,000 acres of Federal lands and 6,600 acres of private lands were ravaged, along with 12 residences and 44 minor structures that were damaged or destroyed. However, the Pueblo of Isleta experienced limited damage to their Tribal lands as a result of a combination of fuels management treatments that had been completed more than a decade earlier.

Thinning, lopping, piling, chipping and mechanized shredding treatments to an area approximately 130 feet wide and 5.9 miles long (total area of 85 acres) in 2004 and 2005 (with some follow-up fuels treatments in 2012) along the southern and eastern boundary of the Southern Pueblos Agency created the Isleta East Boundary Fuel break. At a cost of $106,000, this work modified the fuel bed, creating open-canopy forest conditions limiting the understory and light surface fuel loading.

Montane woodlands and timberlands are rare on the Pueblo of Isleta’s lands and embody qualities that are highly valued by the Tribe; damage to these areas would have significantly impacted the Tribe’s traditional, cultural and economic resources.

A simulation of potential fire growth was conducted using state-of-the-art wildland fire models, and the projection indicated that without the fuel break, the fire would have likely crossed boundaries, spreading further north and impacting an additional 4,520 acres of Tribal lands, resulting in a direct economic impact approaching $3 million and untold losses to Tribal cultural values. From a fire management investment perspective, if the total of all avoided costs ($2,951,000) are considered in relation to the present value of fuel break construction costs ($129,000) the resulting benefit/cost ratio is nearly 23:1.