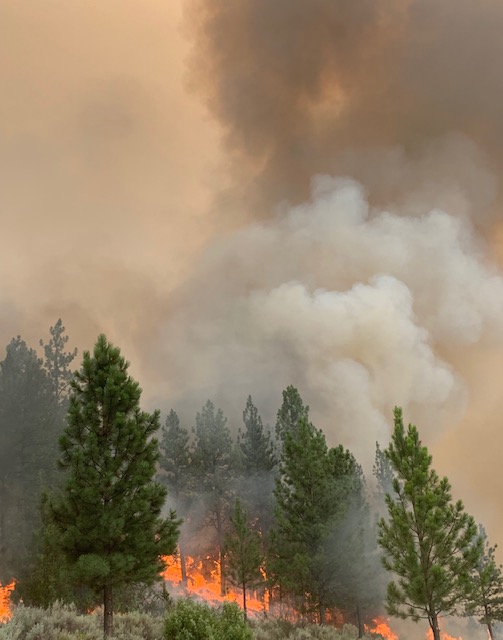 Invasive conifers burn during the Moss Rang Wildfire, which was managed to remove grass, brush and conifers encroaching into winter habitat. Photo: CSKT 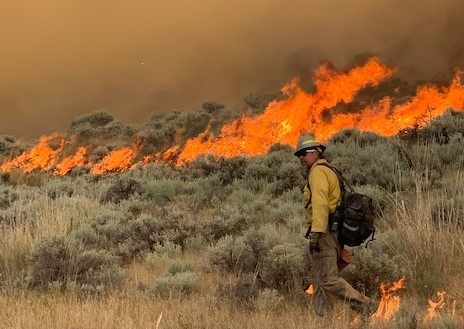 Firefighter drags fire behind him in a planned pattern igniting grass and brush ahead of the wildfire's front. Photo: CSKT 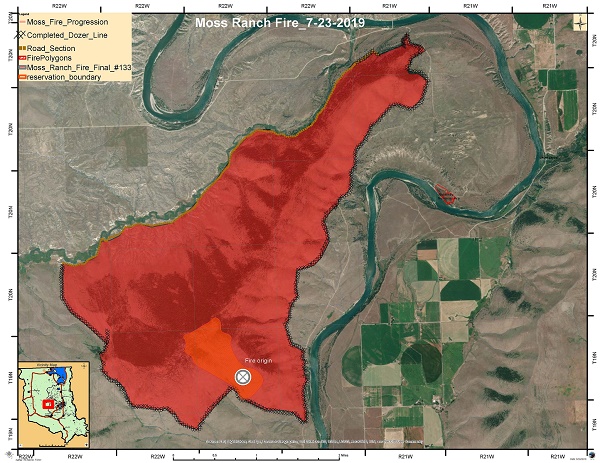 On July 23, 2019, lightning sparked the Moss Ranch Fire on the Confederated Salish and Kootenai Tribes (CSKT) trust lands. Striking midway up a remote slope in a steep, rocky, portion of the Flathead River corridor, the wildfire grew faster in the cured grass and sagebrush than wildland firefighters could suppress it.  Adding to this were safety complications firefighters experienced—bees were swarming, stinging the faces and necks of multiple firefighters which required emergency medical care for two of the firefighters that had allergic reactions.

Burning vegetation ahead of the wildfire’s front stops the wildfire when it hits the new blackened area. This tactic, called a burnout, is a common, and effective means of containing wildfires.

If ignited, the total fire size would be about nine square miles (5,700 acres).

This strategy was not only the most efficient for firefighters, it also gave them a safer position from which to extinguish it. This approach also required fewer resources.

Using existing roads also meant firefighters didn’t have to cause unnecessary damage to the remote landscape, which ranchers valued as prime grazing habitat; and because fewer resources were needed to do the work, the cost to suppress the $1.1 million wildfire was also kept lower.

The downside to this plan was that it required putting more fire on the ground than what was already naturally burning. It also required coordination with multiple tribal natural resource programs and the Montana Department of Natural Resources Conservation as a small piece of their land would be impacted.

Briefing the Plan & Working with Cooperators

While the wildland fire management staff understood the risks and how to reduce them, they still needed concurrence from the Tribal Council whose concern included the interests of the Montana Cattleman’s Association, an important tribal partner.

After consulting with the Association to understand their concerns, fire managers adjusted the location of the eastern containment line to protect prime grazing land while still using the natural terrain to their advantage, making the area safer for firefighters to work.

Assisting with the operation was the Mission Valley Helitack Crew which supported a helicopter that dropped plastic sphere dispensers to ignite the more remote interior areas. A hand crew ignited the fire in a planned pattern to keep the fire’s heat concentrated in the desired direction while other firefighters staffed fire engines and skidgens to deliver water to the edges to ensure the fire did not escape beyond the established containment area.

Working against an oncoming dry cold front that held the potential to bring erratic, high winds, firefighters were successful at keeping the fire within its desired footprint.  At the end of their long and successful day, the wildfire was contained at 8.2 square miles (5,300 acres).

The remote vegetation of the Mission Valley Mountains evolved with fire; however, for decades, the area has suffered from fire exclusion. Now, thanks to the careful work of fire managers and professional firefighters, the Moss Ranch wildfire successfully reintroduced fire to the landscape. Consequently, juniper trees and other invasive plants that are encroaching into natural meadows are now gone.  New nutrients will be recycled into the soil, which will provide richer forage for cattle and wildlife in the years ahead.

In times of crisis, wildfires can bring people and partners together to achieve a common goal. This was true of the Moss Ranch Fire. Through open communication, fire managers came to understand the concerns of the Cattlemen’s Association and adjusted their fire suppression tactics to reduce the overall impacts. At the same time, Association members came to accept the benefits of using carefully managed fire to protect and improve the quality of grassland areas.

Prior to the Moss Ranch wildfire, Tribal land managers had approved a land management plan calling for a prescribed fire to reduce conifer encroachment and enhance wildlife

wintering habitat. An approved Environmental Assessment (EA), a necessary component required by the National Environmental Policy Act (NEPA), was ready as was other requirements; however, due to lightning, the wildfire replaced the need to perform the scheduled prescribed fire.

When considering ways to manage wildfires, firefighter safety is always the first priority for fire managers. In the case of the Moss Ranch wildfire, multiple management objectives were also met by taking a bigger approach. Firefighters were kept safer, additional long-term disturbance to the land was minimized, partnerships were strengthened and our landscapes were made healthier for future use.