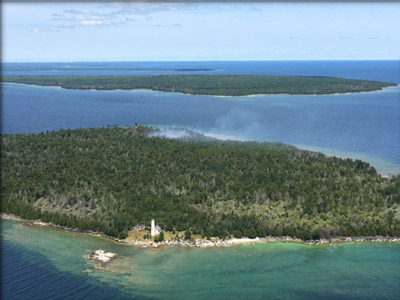 Lighthouse on the 200 ac. Poverty Island is centered on the southern end of the Island while a small smoke column is visible on the other side of the island, north of the structures.

The Poverty Island Wildfire ignited June 26, 2016 by a lighting strike on a 200 square-acre island off Michigan’s Garden Peninsula in Lake Michigan.

Legend says the Island is the final resting place of four chests of gold once sent by the French to the Confederate Army during the Civil War. Never found, the island is a place of intrigue.

When the fire began threatening a historic lighthouse and associated buildings and blowing visible smoke to Michigan’s mainland, concern and public interest rose. Before fire management agencies could respond, questions about the island’s jurisdiction were pursued.

As it was no longer the Coast Guard’s responsibility to manage the Island, the Coast Guard requested the BLM to assist with transferring jurisdiction. As one of the only agencies authorized to transfer Federal land, Poverty Island thus shifted to the care of BLM.

Due to the BLM’s lack of fire management resources in Michigan, interagency agreements were then leveraged to provide fire support.

While it is common for BIA to use agreements that gives fire management agencies authority to provide fire protection services on Trust land, the Poverty Island Fire is a rare incident where the BLM is using an agreement giving BIA authority to manage the fire.

A boat loaned from Apostle Islands National Lakeshore, a U.S Forest Service helicopter and firefighters from the BIA, Fish and Wildlife Service and Forest Service are assisting in the management efforts.

The fire is burning in peat and heavy standing and blown down timber, vegetation that will cause the fire to smolder until winter weather eventually puts the fire out. Until that time, firefighters are taking actions to protect the lighthouse and surrounding buildings. Once structures are protected, firefighters will monitor the fire until winter finishes their job.

As of September 14th, the Fire is smoldering in the interior, despite seven inches of rain.

The BLM is now in the process of transferring the Island the care of Fish and Wildlife Service, the Agency responsible for managing most other islands near the peninsula.